The boys used to nap in the same crib a lot; but I have always put them to bed at night in separate cribs. When they were little I was worried about SIDS, and as they got older they started crawling over each other and I stopped even having them nap together. Their cribs are right beside each other, so they "talk" and laugh as they go to sleep and wake up. I have always struggled with knowing what the boys wanted -- whether they preferred the closeness with their twin, or if they wanted their own space. I just didn't know, but they didn't seem to mind sleeping in separate cribs, and they just moved so much!

In the past few days though, something interesting has happened. Adam has been requesting to sleep in Matthew's crib. Usually we say, "are you ready to go in your crib" right before we put them down. We ask them, because they always start pointing to their crib when we say this. The last few days, Adam has started pointing to Matthew's crib before nap time and bedtime. I have let them nap together twice this week.


Today at bedtime, when Adam realized we were going to put him in his own crib instead of Matthew's, he had a meltdown. Crying, tears. And he kept pointing at Matthew's bed (Matthew was happily in his bed at this point).  This is the first time Alan had seem this, and he was hesitant to have them sleep in the same crib for the entire night. But we finally decided to go ahead and let them; he so obviously wanted to be with his brother. As soon as we put him in the crib with his brother, he got a huge grin. 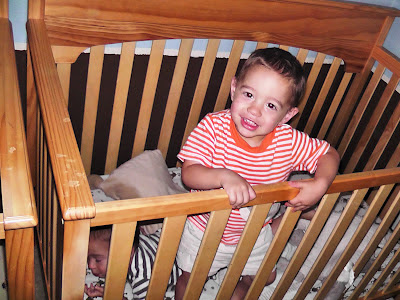 Then they looked at each other, smiled and laughed. We told them goodnight and shut the door, and we heard tons of giggles.


I had to check on them a few times because the sounds were so cute. When I first peeked in, Adam and Matthew started playing peek a boo at me through the bars of their cribs. The next time I peeked in, they were both laying down next to each other, looking and smiling at each other. It was seriously adorable.

This is the first time they have really shown a preference to sleep close to each other. I have been worried they wouldn't be close because they seemed to fight more than play. As they are getting closer to 2, they seem to be getting less "selfish" and actually enjoying their twin. :)

Alan and I just checked on the boys, and they were asleep, laying right beside each other (unlike the above picture). I love that they have each other. Now I worry about having a singleton in the future. Will he/she be lonely??
Posted by Krystal at 6:34 PM 5 comments:

(Pictures are of the boys and Alan playing with our remote controlled helicopter.
Matthew in blue, Adam in orange.) 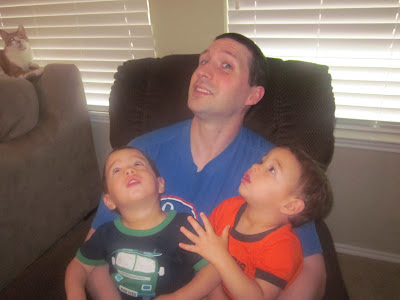 Today when Alan got home, the boys and I were playing together in the playroom. The gate was closed, but the door itself was open, so Adam saw Alan walk in. He was so excited he immediately stopped playing with me, ran over to the gate and yelled, "Dad-dy! Dad-dy! Dad-dy!" 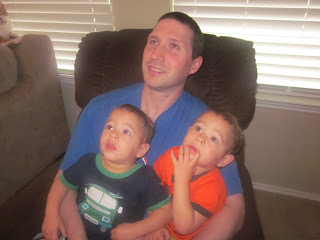 Daddy didn't hear him right away (or he had to situate himself first), and he walked right past the playroom area. Adam immediate climbed onto the lower part of the gate and cried (literally), "Dad-dy, dad-dy, DAD-DY!" This time Alan walked over, and I have never seen such an excited little Adam. He started smiling, breathing fast and putting his arms out. (Matthew was excited to see Daddy too, he just wasn't as vocal today about it) Then we all 4 played in the playroom; Adam was glued to Alan's side. It was adorable. I definitely felt like I was being replaced as the favorite parent. 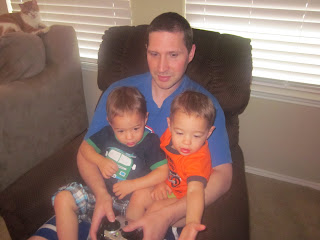 That was one of those moments that make you so happy to be a parent <3 Alan was smiling really big too. He is very loved :)

Alan was making the kids laugh so hard during the kids' bedtime routine tonight. We usually each snuggle with a child before bedtime. Usually Adam wants to cuddle with me, and Alan gets Matthew. Tonight I started to cuddle with Adam, but he wanted Daddy instead. Thankfully Matthew came to me :P As we were leaving the room though, Adam became upset, cried and reached for Mommy. :) I have to say I liked that he still remembered me ;) I cuddled with him for just a few minutes, and he was fine, and laid right down.


Today was just a great day with the boys, and then to see them loving their Daddy so much is just heartwarming!! 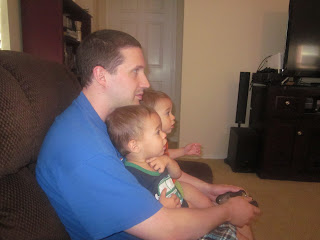 
Also update on cloth diapering : We had been having issues with leaking (with all the kinds of cloth diapers we had tried). We stripped our diapers, which helped but didn't cure the problem. So now we are doubling the inserts and we have had no more issues (I have extra g-diaper inserts I use, and then I also use our old "burp cloths" when I run out of extra inserts.) Our kiddos are "super soakers" (They love their milk, and drinking lots of water out of water bottles.. so lots of pee). I still love my SmartiPants the best!! And a friend of mine let me borrow a ton of cloth diapers, so now I have plenty for during the day, it is so exciting :) No leaks and plenty of cloth diapers = happy Momma. Now that I have extras, I have time to hang them outside to dry more often. In this (almost) summer heat they dry really fast and the sun bleaches out all of the stains. I have a feeling we are still far away from potty training, so I am having fun experimenting with the cloth.
Posted by Krystal at 6:56 PM 1 comment:

I hope all of you Mommas are having a great Mother's Day. We definitely deserve it, right? ;)

Our boys have grown so much since last Mother's Day. . Last year the boys were crawling; now they are running, jumping and climbing. Last year Alan let me sleep in while he cooked me breakfast... which I ate while tandem nursing the boys. Those days are past. This year we went to Cracker Barrel with Alan's family and the boys tore through 2 eggs each, 1/2-1 french toast each, some multigrain pancake bites, orange slices, and turkey sausage. Wow. After breakfast we were going to go to the Fort Worth children's museum, but found out they didn't open until noon. (Nap time). So we went to Ripley's Believe it or Not/Wax Museum instead. 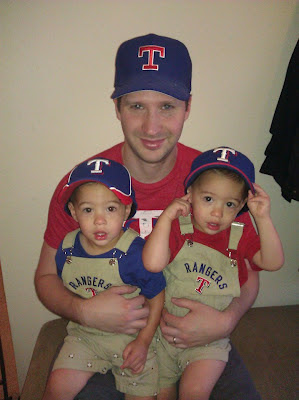 The three boys that made me a mother! About to leave for a fun morning. (All of these pictures were taken on a cell phone, so I apologize for the quality). 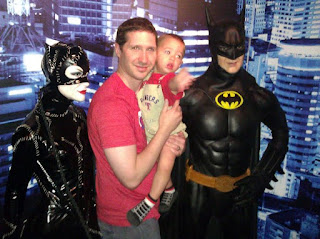 The boys weren't the biggest fans of the wax people. 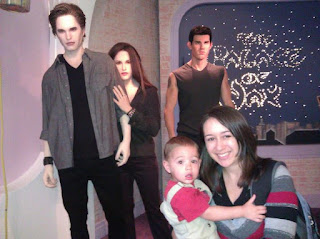 We had to hold them in our arms the whole time, they were just a little too scared to walk. 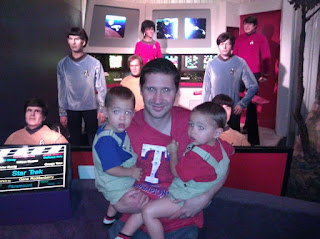 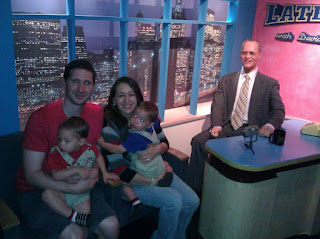 Being interviewed by David Letterman. 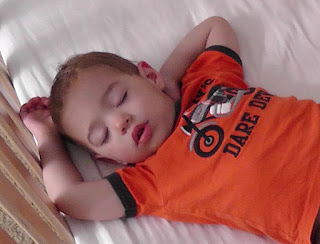 And this is what the boys did when we brought them home (after talking to each other and jumping around for about an hour... it throws them off when they fall asleep in the car and have to be transferred to their cribs). This picture was actually taken of Adam on Friday. Gotta love sleeping toddlers!!
Posted by Krystal at 1:10 PM No comments:

We are switching to computer charting, and this was my first "live" shift. Wowsers :-o My head hurts.

My hubby was in bed when I left and when I got home. So were my kids. I basically live to give my kiddos cuddles before bedtime (it is one of my favorite times with them), and to cuddle up with my husband before I go to bed. So it was sad that he was already sleeping. I knew the boys would be in bed. Hopefully they will forgive me for not seeing them at all today.

They want me to work again tomorrow. They are really short, so I feel guilty. If I didn't have kids, I would have said yes in a heartbeat, but tomorrow I am going to cuddle with my boys, and see my hubby a little as well! :)
Posted by Krystal at 8:06 PM 3 comments: