Where Do I Live Again?

Because I thought I lived in Texas. Where it is supposed to be warm and sunny. I think someone may haved missed the memo on this, because this winter has been crazy! Yes we have had a few days of 70 degree weather, but it has been interspersed with ice days/blizzards and now... today... more snow than I have ever seen fall in Texas. It snowed all day, from around 8:30am on. And it is still snowing.

In contrast to the ice & the blizzards though, today has actually been enjoyable :) The roads weren't too bad because the temperatures were above freezing. My brother David came over & we worked out together. Then we went on an adventure outside to get Subway for lunch & then he went with me grocery shopping. (I thought that was really sweet because we were way overdue on a shopping trip, but I really didn't want to drive in the snow.)

Then, after David left & Alan came home, we made a MASSIVE snowman in the backyard. Alan named him Epic Man. Epic Man is a full head taller than Alan, and wayy taller than me. 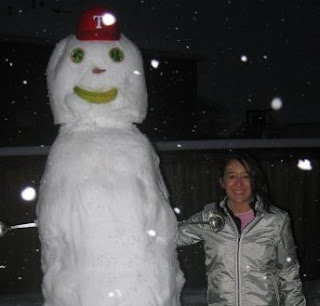 He is facing towards our living room window, so when the window in open... Epic Man is staring into our house. (It's a little creepy actually, lol)

All in all in was a good day. I am just so thankful I was not scheduled to work today... and especailly thankful I am not working tomorrow because it is supposed to freeze tonight. If you are driving tomorrow, please be careful!

--
In an update to my last post about my car: I got a quote on the damage. It would be $2500 to fix. (Which I think is crazy!) Also it is an older car, so more things are going to go wrong with it. So, we are looking at buying a new car. (At the moment Alan is driving my banged up car... It works fine but it makes a strange noise, we're pretty sure it's not going to pass inspection, and it just looks bad). This new car will be Alan's... but we decided the next car is going to be a family car.. and it will be mine :)
Posted by Krystal at 7:05 PM 1 comment: