A family friend hosted my baby shower last Sunday. It was a wonderful time. It was great seeing so many people excited about the babies :) There were 26 guests, and they all signed both baby books, so the babies will both get a copy when they get older :) 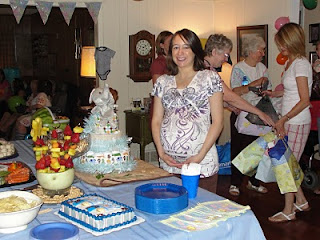 Me with the gorgeous spread, including the amazing diaper cake, fruit kabobs, cake, vegies, and mini cheesecake pieces. Very yummy. 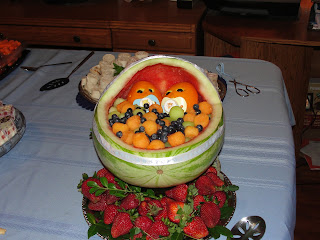 The very creative fruit bowl that my mom made. Aren't the little orange babies adorable? 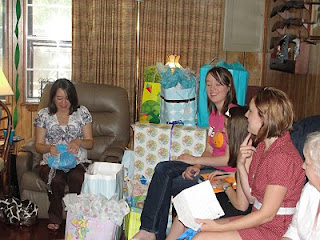 Opening up some presents. Lori on the far right (with the red dress) made the beautiful diaper cake! 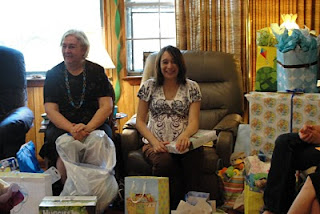 My mom and me with presents everywhere! 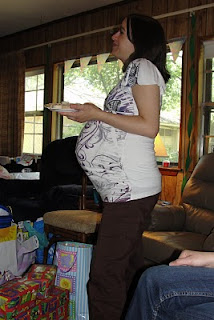 I included this one because it's a good side shot @ 29 weeks. Just ignore my expression please!
Now I am having fun getting everything organized in the nursey (& bathroom for the bath stuff). I wish I could get everything together faster, but I get tired so fast, and I have to save some energy for working. But everything is coming together :)
On a side note, there is no longer any "innie" to my belly button. But I still don't think it's quite an outie, except for the top flap that is sticking out, lol.
Posted by Krystal at 11:13 AM 1 comment: 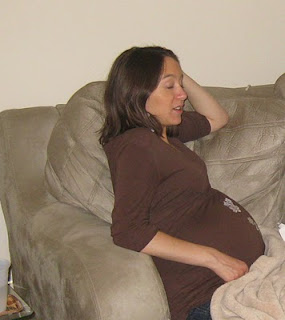 An unposed shot, but the best sideview I have at 28 weeks.
Here are the stats from today's appointment:

They are huge. The average weight of a 28 weeker is 2 pounds 4 ounces. Mine are about the size of 30 weekers.

The amniotic fluid level for the twins is the best level my ultrasound tech had seen in a while, she told me. She says for twins she's been seeing 9 and 10 (which is the lower end of normal). My twins had levels of 14 and 18. Yikes! No wonder I look like I'm 40 weeks pregnant.

The twins are no longer positioned in the nice perfect head down position they were at 24 weeks. Both babies are diagnal/transverse. Baby A's head is tilted down (on the left side of my body) with his body toward the right side of my rib cage. Baby B is kind of on top of him, but he is tilted head up. He is flexed so that his head and his feet are both close to my rib cage. (On my right side). No wonder I have been so confused about who is kicking when. Also, I've been feeling a lot more movement on my right side than on my left. No wonder, since all of the feet are on my right side!

Still no change to my cervix :)

My doctor said everything looks great, and I should go to at least 36 weeks. She wants to see me back in a week though, because "it's twins". I don't mind, since my appointments are when I'm reassured everything is ok :)
Posted by Krystal at 7:41 PM 4 comments:

Last week I started getting concerned because these contractions seemed to be coming more frequently than I thought was normal. I decided to time them for an hour. I got 6 in an hour! (They weren't every 10 minutes.. it was more irregularly spaced.. 5 minutes, then 15, etc). I waited a few hours and then counted again, and I got 5 in an hour. I decided not to do anything right then, since I had no other symptoms and they weren't regular or getting more frequent.

The next day at work, I continued to have them (as I've been having them for weeks), and discuseed it with a fellow nurse who had recently given birth to twins. She thought it was concerning... and that was enough to get me on the phone with my doctor. I explained my symptoms to the nurse, and told her I was at work which is right across the street from my doctor's office. She told me to go ahead and come in to be checked. (This is one reason I wanted to deliver at my hospital... I am right there if anything happens!)

I walked over to get checked (to make sure I wasn't dilating or effacing). And the verdict is... 5cm dilated! Ok just kidding ;) I wasn't dilated or effaced at all.. which really made me feel a lot better. I did come back and tell my podmate I was 5cm dilated, and she did believe me for a second.

My doctor laughed at me though, because I tried to wrap the modesty drape thing they give you around my hips & I ended up tearing it because it was too small. She said it's only the people who were skinny that try to wrap it. She told me I'm not skinny anymore! Way to rub it in doc ;) I honestly thought the drape looked plenty big enough to wrap, so I guess I am in denial about how large I really am.

I still have the braxton hicks contractions every day (and night), but I'm not worrying about them as much as I was, since I know after all those weeks of having them, they aren't causing me to dilate or efface at all.

On a separate note.. on Sunday my work friends through me a baby shower pool party which was a lot of fun! It was hosted at on the nurse's beautiful houses. It really made me think all baby showers should be pool parties (in the summer) becuase the water feels so good.. makes you weightless... which is a wonderful way to feel when pregnant :) I think there was a good turnout, and I got some nice stuff for the babies, which I can't wait to use :) I also got a group gift card, which we used to help buy the cribs. So exciting! I actually just finished setting up the cribs this morning!! Everything is coming along :) Here are a few pics of the nursery: 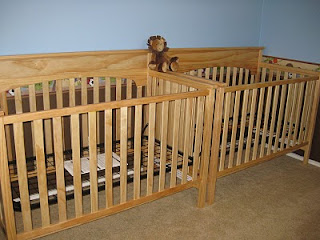 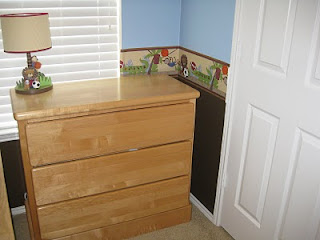 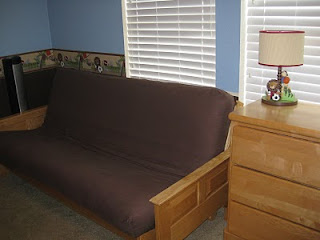 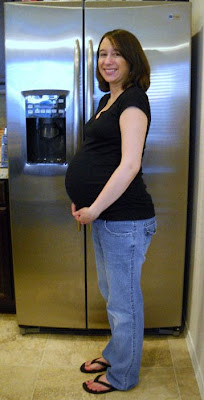 So last Friday I didn't get to peek at my babies, but I did take the lovely glucose tolerance test & the fFn test (given routinely to moms of twins by my OB to check for premature labor). I might add that the fFn test requires an internal swab, and my OB came into the office visibly uncomfortable and declaring she had to pee but she "wanted to see me first." I told her I promised her I would wait! But she went ahead and did my entire exam & test & answered my questions (which I insisted on asking her.. hey I gave her a chance to pee before she started ;) )

Neither test was too bad. I had heard horrible things about the drink they give you for the glucose test, but really it just tasted like orange soda minus the fiizz. The fFn test wasn't bad either, slightly uncomfortable but way better than a pap smear. Oh, my OB also routinely gives betamethasone to her twins at 26 weeks, but I asked to have that postponed unless there was anything she saw on exam that had concerned her.. since it is most effective the first week or two after it's given. So we are postponing until 30 weeks. :)

Next appointment I am getting another ultrasound, woohoo!
--

On an unrelated note... here are a few of my thoughts on pregnancy: