Today, Alan and I flew back today from our 1 year anniversary trip to New York/Canada to see Niagara Falls and a baseball game in Toronto.
I am blessed to have married a wonderful man like Alan! :)
While we were visiting Niagara Falls (walking on planks that werebuilt near the bottom of one of the smaller falls), Alan took a video that I think shows a funny/good example of a wife hesitantly trying to submit to her husband ;)
Notice I did not wholeheartedly submit to that ;) This video was taken on what they call the "Hurricane Deck." As you can see the water is coming down pretty strong, but what you can't see is that the water is freezing too!!
A few other pictures from our trip: 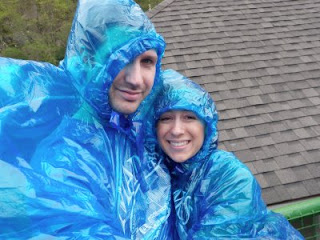 Geared up for our "Maid of the Mist" boat tour of Niagara Falls... 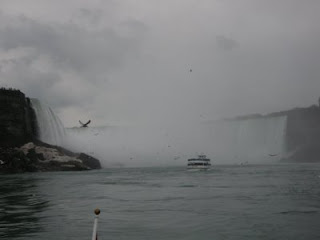 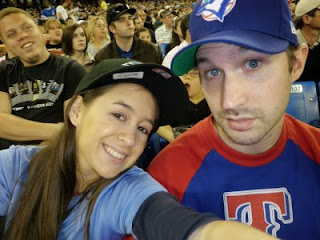 At a Blue Jays/White Sox game in Toronto, Canada.
All in all, it was a good trip, but it was definitely great to be home again!!
Posted by Krystal at 4:11 PM No comments:

Today, my younger brother David came over for the afternoon. We ate lunch, went over some of his college information, played ping pong (I'm not sure who we decided was finally "champion of the world"... it seemed to go back and forth), and explored our new neighborhood on the bicycles Alan's brother gave us. Good quality time with the bro!
But it will be the last time I see David for about 2 months :( He is going to Austria for the summer to spend some time with a certain lady he knows over there ;) So another thing we did today was set up a blog for him while he's traveling. His new blog is here:  thetravelingdave.blogspot.com.
3 unrelated side notes:
1. I'm sad the Mavericks lost tonight, but at least the Nuggets didn't sweep the series.
2. At least the Rangers won, even though me, Alan, Jeremy & Sherry left that game early today.
3. Tomorrow is My & Alan's ONE YEAR ANNIVERSARY! Woohoo. Unfortunately we are both working, but on Friday we will be flying out to New York. :)
Posted by Krystal at 8:42 PM 1 comment:

My husband is one of the best gift-givers I know. He picks up on what people like/things that interest them.
I love to read, and I had been reading a lot leading up to my birthday this year, but Alan was aware that I was frustrated I couldn't get anything done while reading. (When we can all get housework done while watching TV!)
So, for my birthday this year, Alan bought be the new Amazon Kindle 2:
http://www.amazon.com/Kindle-Amazons-Wireless-Reading-Generation/dp/B00154JDAI/ref=amb_link_84345611_2?pf_rd_m=ATVPDKIKX0DER&pf_rd_s=center-1&pf_rd_r=0PXPHNPQFMN791G8W89G&pf_rd_t=101&pf_rd_p=477162311&pf_rd_i=507846 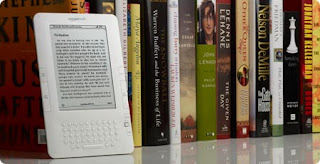 It's an e-book reader with e-ink that doesn't strain your eyes (and you can read outside, which you can't do if you download e-books to your computer), you can download books wirelessly, and my favorite feature... it will read your books to you, so I can get stuff done while I 'read'!! We thought it needed a name since it reads to us, so we named it Windel the Kindle ;)
I would never have bought this myself, because it's expensive, but I thought it was a very thoughtful gift from Alan! Thanks hubby <3
Posted by Krystal at 6:33 AM 2 comments:

I am exhausted today, but I feel like blogging. It has been a few months since my last update, but it feels like more because of all of the changes we've been through! Here are some of the highlights that have happened over the last few months (in rough order).
And finally, yesterday we had a Mother's Day Lunch for my mom and Alan's mom. We had my family over and Alan's parents.  We ate, talked, and played pool/ping-pong. It was great having everyone over, enjoying themselves. After yestday, then staying up late watching Survivor (guilty pleasure), and then getting up early and working 12+ hours today, I am exhausted. Tomorrow, it's work again, and then one day off to pack for our one year anniversary trip to Buffalo, NY/ Canada!
So a busy few months in the life of the Orr's!
Posted by Krystal at 6:56 PM 1 comment: